Hoteliers are moving to the cloud at an unprecedented rate which means things are changing quickly and hospitality professionals will have to act just as ardently in order to stay on top of their game.

Larry E. Collier, Jr., Director of Operations for H.I. Development Corp. in Tampa. FL has been selected by Oracle to participate as a panelist in the Q&A session titled “Our Oracle Hospitality OPERA Cloud Service Journey” at the Oracle Hospitality Conference 2020 in San Diego, CA. During this Q&A session, attendees will hear compelling stories about why these hospitality and tourism professionals made the move to the OPERA Cloud, how they executed it, and what benefits they’re reaping.

Larry Collier brings 30+ years of experience in the hospitality industry with in-depth knowledge of properly implementing the Oracle Cloud in small independent hotels – a wealth of knowledge that can be applied to hospitality ventures of all sizes.

Joining Larry on the panel are Tanya Pratt the Associate Vice President of OPERA Cloud Strategy for Oracle Hospitality, Doug Leckie the Senior Vice President of Cast and Guest Systems for Disney Parks and Resorts, Steven Schultz the Director of Rooms for Banff Park Lodge and Matt Durham the IT Director for Columbia Hospitality.

“Oracle Hospitality Connect is a two-day event bringing together hoteliers, technology partners and key Oracle Hospitality executives to see the latest in hospitality technology and foster networking and idea-sharing within our community. The event will provide product strategy overviews, showcase cloud solutions and hardware, and host panel discussions on the industry’s foremost topics.”

H.I. Development Corp., founded in 1959 is based in Tampa, FL and manages hotels and restaurants throughout Florida and Puerto Rico.

This holiday season is going to be bright and joyful – even more so when we share our compassion with others. Newschannel 8’s Kindness Day is coming up on December 13th and H.I. Development’s Connee McGilvray is spearheading the collection of teddy bears and children’s toys at the office for the event, just as she has done for the past decade. The four charities benefiting from Kindness Day this year include Feeding Tampa Bay, OneBlood, Toys for Tots and the Tampa Rough Riders Teddy Bear Roundup.

It’s easy to make a donation in person – you can start a collection at your office or home, like H.I. Development has done, and donate it at the event with their easy drop off system. According to eWFLA, “Volunteers will accept donations Friday starting at 6 a.m. and continue until 7 p.m. Donations can be dropped off at News Channel 8 via a fast and easy drive-through system. The drop-off location will be at the station’s visitor parking lot. OneBlood’s Big Red Bus will also be on site to accept blood donations for those that have time to stop, park and donate.

View all details on WFLA

Congratulations to the Barrymore Hotel Tampa Riverwalk for becoming a finalist in the Downtown Tampa Partnership’s Urban Excellence Awards for 2019. The Barrymore is in the running for the People’s Choice Award for Best Collaboration in light of their partnership with Wiesn in a Box‘s pop-up traveling biergarten. The pretzel-serving, German beer-pouring, mobile “bar” was parked in the back of the Barrymore’s lot for two weekends, complete with giant Jenga and cornhole.

The Urban Excellence Awards celebrates businesses, organizations, individuals, events and projects that have made significant contributions toward creating a unique, vibrant and diverse downtown environment – and have made a lasting, positive impact on Downtown Tampa. Each year an awards jury representing a cross-section of Downtown constituencies selects award winners honoring the leadership, innovation, hard work, talent and community spirit.

You can vote for the Barrymore for People’s Choice until October 28, 2019.

The Continental features dishes made famous by some of the most historically iconic hotels and restaurants across America – updated but timeless classics like Steak Diane, Lobster Newburg and Waldorf Salad headline the menu alongside a classic martini bar that showcases finely-crafted cocktails mixed with superior spirits.

The newly redesigned and refreshed bar now seats 18 in plush, comfortable bar stools and features much a desired, ample and attractive workspace for bar staff, plus a bar menu with classic handmade cocktails and a every-weekday happy hour.

The city of St. Augustine is becoming increasingly recognized as a true hidden gem within Florida “foodie” culture – so much that there now exists a Facebook group with nearly 30,000 members from around St. Augustine, the surrounding area and beyond where discerning food enthusiasts flock to discuss their “fresh” or “frightening’ reviews of local eateries.

The Auggie’s Fresh or Frightening Food Reviews Facebook group has blown up in the past year, becoming much more than just a review forum. At its core, FOF is about the love of food. Above all else, it’s about the shared sense of closeness and community between patron and business owner mixed with the passion for creating positive customer experiences .

On June, 20th, Auggie’s Fresh or Frightening Food Reviews will celebrate the one year anniversary of its inception with a property-wide event at Guy Harvey Oceanfront Resort in St. Augustine Beach. FOF members will have a chance to mingle with other members, chefs and restaurant staff while enjoying the hotel grounds, restaurant, tiki bar, beach and pool.

The family-friendly celebration will feature samples from local chefs including Joe and Jennifer Ronan of Santiago’s Florida Kitchen, the multi-award winning restaurant located on site at the Guy Harvey Oceanfront Resort, pirates and a treasure hunt for the kids, flame twirlers after sunset and live entertainment from popular local artists, Chillula and Heather Craig.

This event is open to the public. Tickets are $40 per adult, includes food samples and one house beer or wine. Kids 14 and under admission only is $10.

Congratulations to our hardworking general managers and the entire staff at not one, not two, but three of our Florida hotels for achieving the Tripadvisor Certificate of Excellence Award for the year 2019.

The Tripadvisor Certificate of Excellence award is based on consistently great reviews that businesses earn on the world’s largest travel site. The attention to detail, dedication to positive guest experiences, and 5-star customer service provided by the staff at each of these hotels has earned them not only this recognition, but is proof of our management’s commitment to fostering work environments that cultivate employees with scrupulous work ethics.

The Guy Harvey Oceanfront Resort was recently named one of the top beachfront hotels in St. Augustine Beach by Trips to Discover: Florida, an online travel discovery website with over 800,000 followers on social media and 14M annual website visitors.

Trips to Discover applauds the hotel for the “relaxing ocean tones” adorning the guest rooms, direct location on St. Augustine Beach and convenient pet-friendly rooms that allow every member of the family to enjoy a beach vacation.

Full Article on Trips to Discover 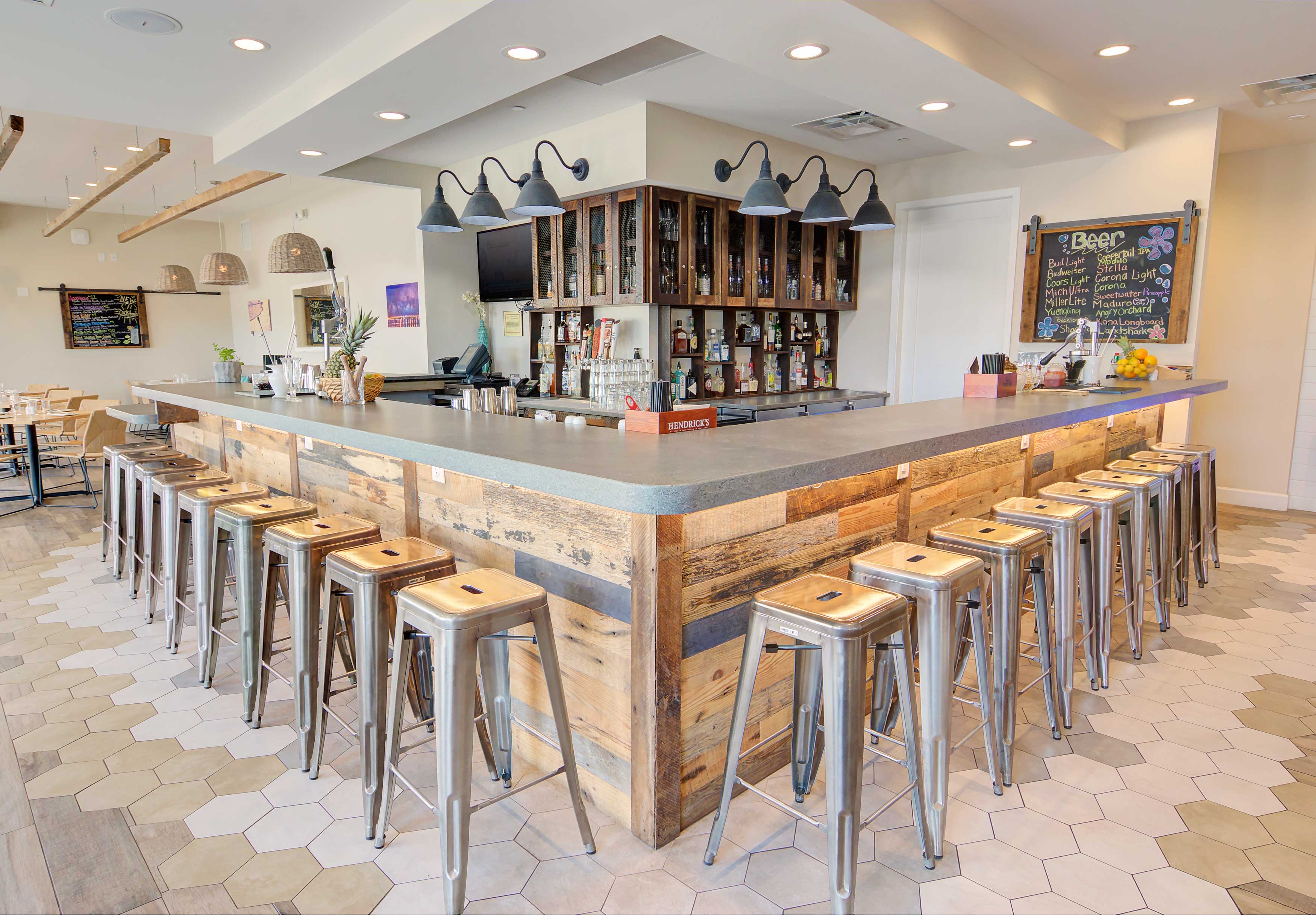 Executive Chef Joe Ronan and his culinary team certainly know how to prepare a meal – but great customer service, pure talent and creativity in the kitchen have played a major role in the restaurant’s the ability to win multiple awards, earn steady positive reviews across multiple online review sites and social media including the popular Auggie’s Fresh or Frightening Food Reviews (a Facebook group of St. Augustine foodies with over 27,000 members), as well as gain a following among locals and hotel visitors alike. 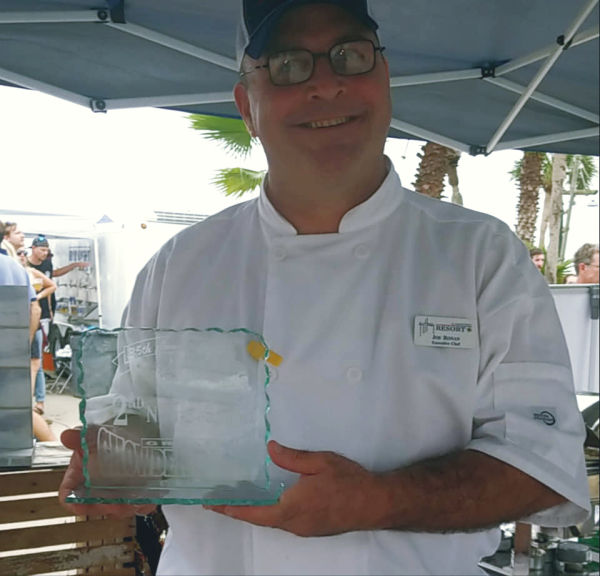 First, not long after opening, Santiago’s won 2nd place for Best Non-Seafood Chowder in The Conch House’s Great Chowder Debate to benefit Big Brothers and Big Sisters of St. John’s County in November 2018. The Great Chowder Debate has been held in St. Augustine since 1984 and is one of the longest-running chowder championships in the country.  Over 30 restaurants from the St. Augustine area come out every November to donate their chowders and their time in hope of winning first place. 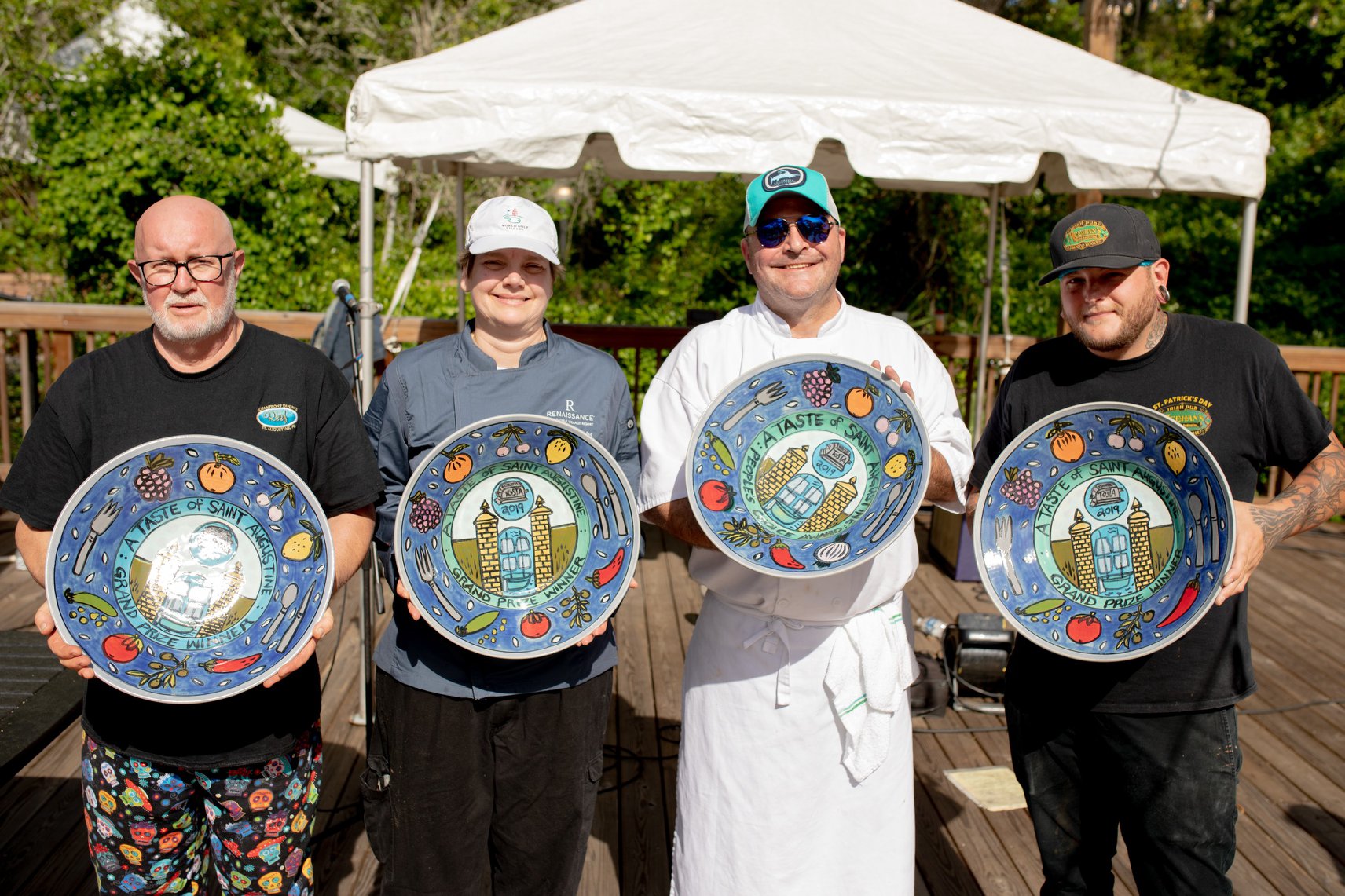 Next, Chef Joe and team recently won the People’s Choice Award at the Taste of St. Augustine to benefit EPIC Behavioral Healthcare on April 28, 2019. At “TOSTA,” guests purchase $1 “tasting tickets” plus a $5 entry fee to sample some of St. Augustine’s local culinary scene for a good cause. Chef Joe’s culinary concoction is a mouthful to pronounce, but was so heavenly to eat. The “Bahamian Conch and Ciderhouse Bacon Crusted Gulf Shrimp with Datil Pepper Orange Blossom Honey” was a hit with event attendees, allowing Santiago’s to “bring home the bacon” with their fifth award in a mere 8 months. 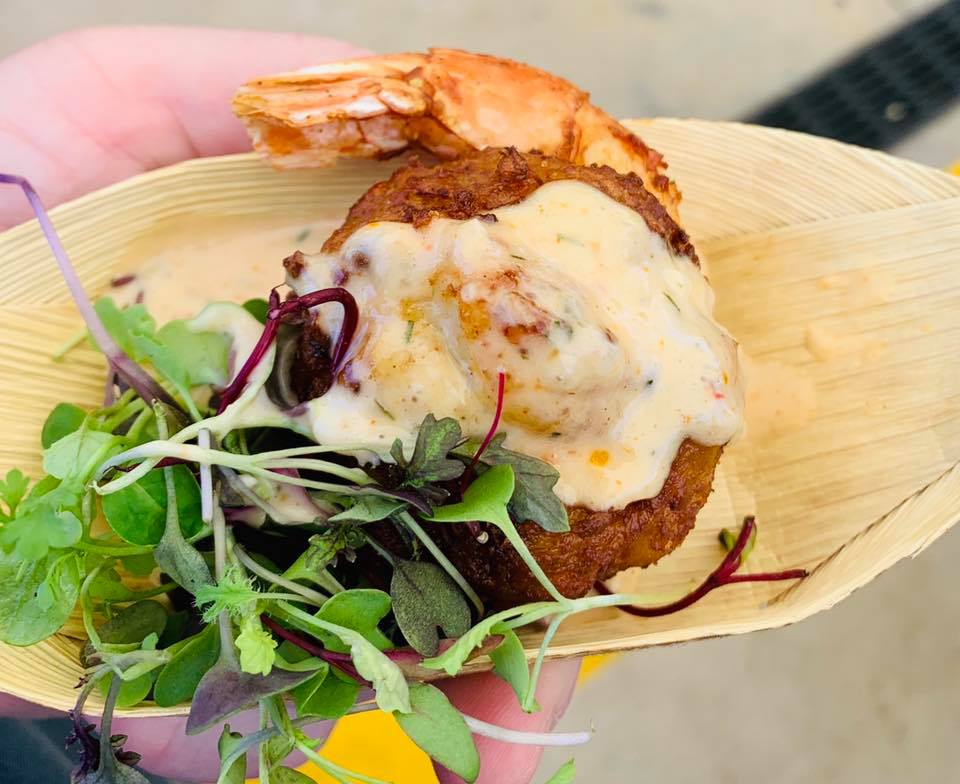 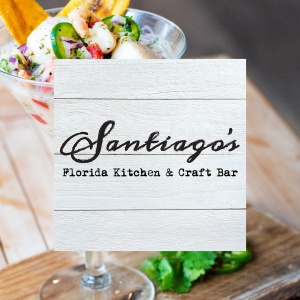 Santiago’s Florida Kitchen and Craft Bar’s menu features an eclectic blend of all the culinary influences that have made St. Augustine the destination it is today  – from local Florida seafood, Spanish and Latin American cuisine with nods to traditional Southern foods. As an eclectic Floridian dining experience, Santiago’s “makes the most of what there is” – as the story of The Old Man and the Sea by Ernest Hemingway says. 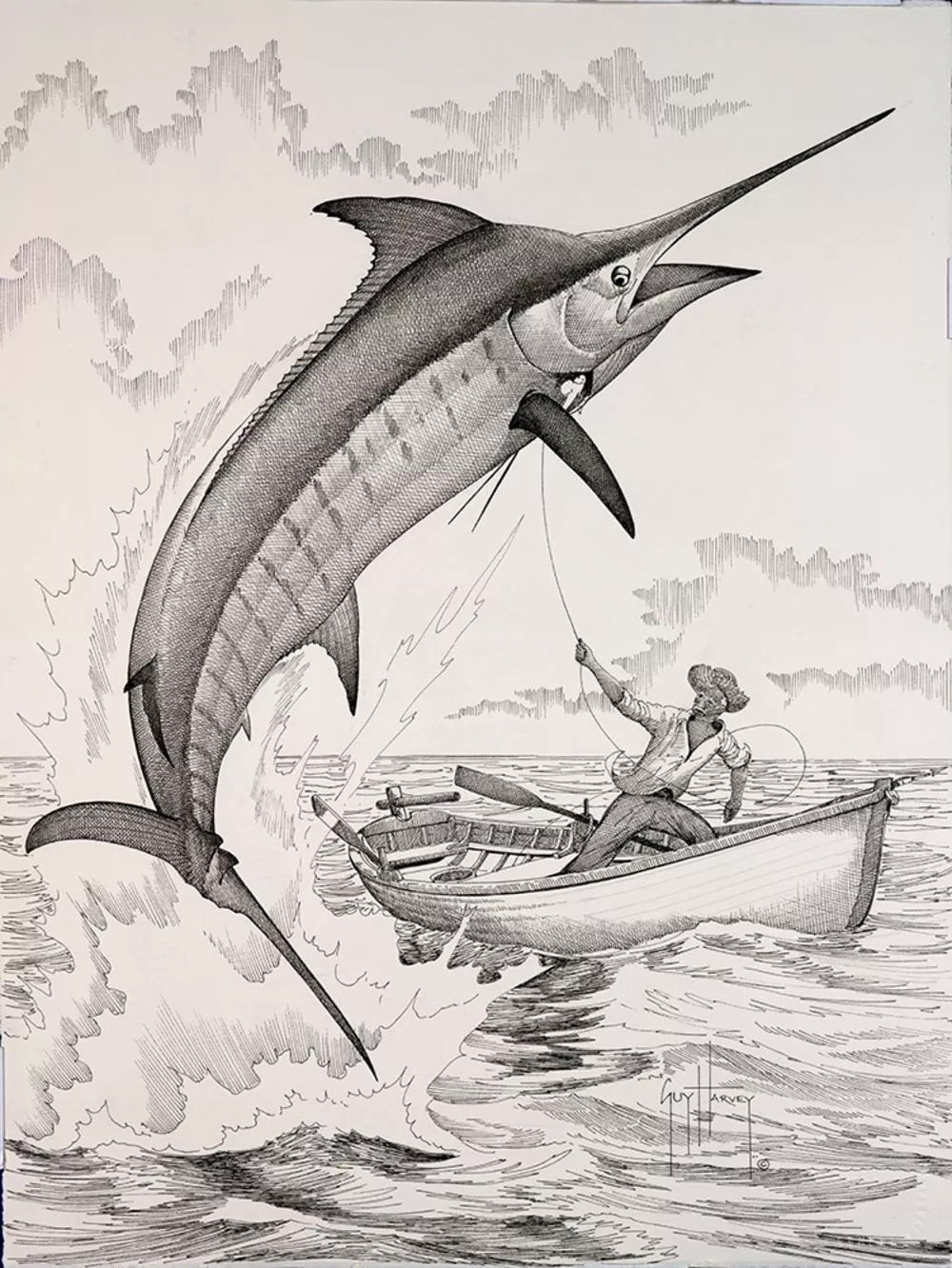 “The Old Man and the Sea” pencil sketch by Guy Harvey 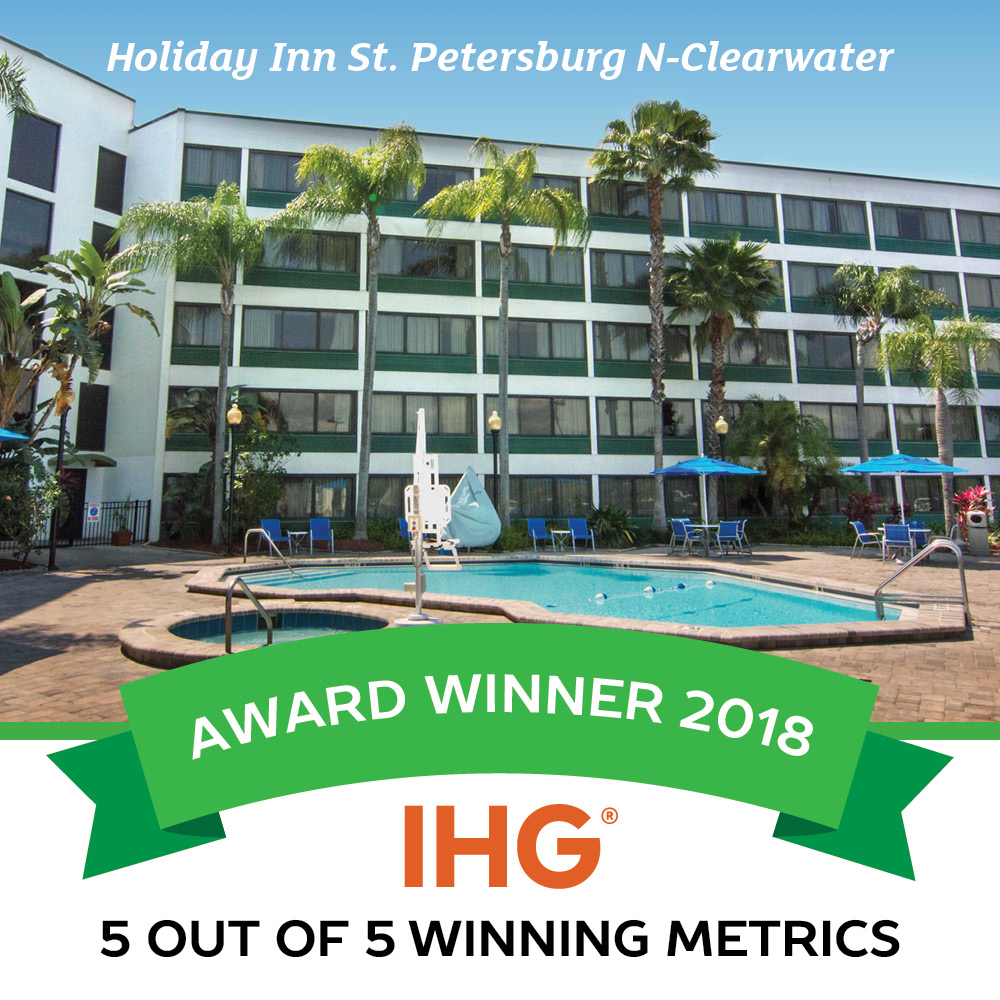 Holiday Inn St. Petersburg N-Clearwater’s outstanding customer service and dedication to guests’ satisfaction has paid off for them once again. The hotel located less than 2 miles from St. Petersburg Clearwater International Airport has taken home IHG’s “5 Out of 5” Winning Metrics Award for the year 2018.

General Manager Richard Markko and the entire staff have been working diligently to provide the best possible guest experience by setting goals and expectations that in turn helped the property achieve the award. 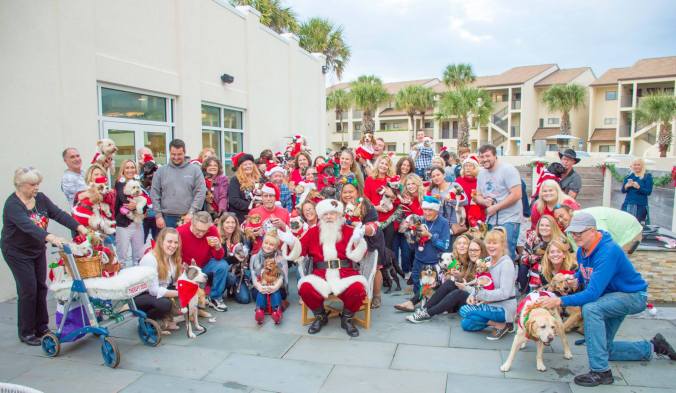 Dog lovers from all around the St. Augustine area gathered at Guy Harvey Oceanfront Resort for the “Santa Paws Holidog Party” to benefit Ayla’s Acres No-Kill Animal Rescue. The event ended up with a total of 64 “Santa dogs” in attendance and will be applying to the Guinness World Records in hopes of setting the record for most dogs at one event dressed as Old Saint Nick – and trying for even more at next year’s event. 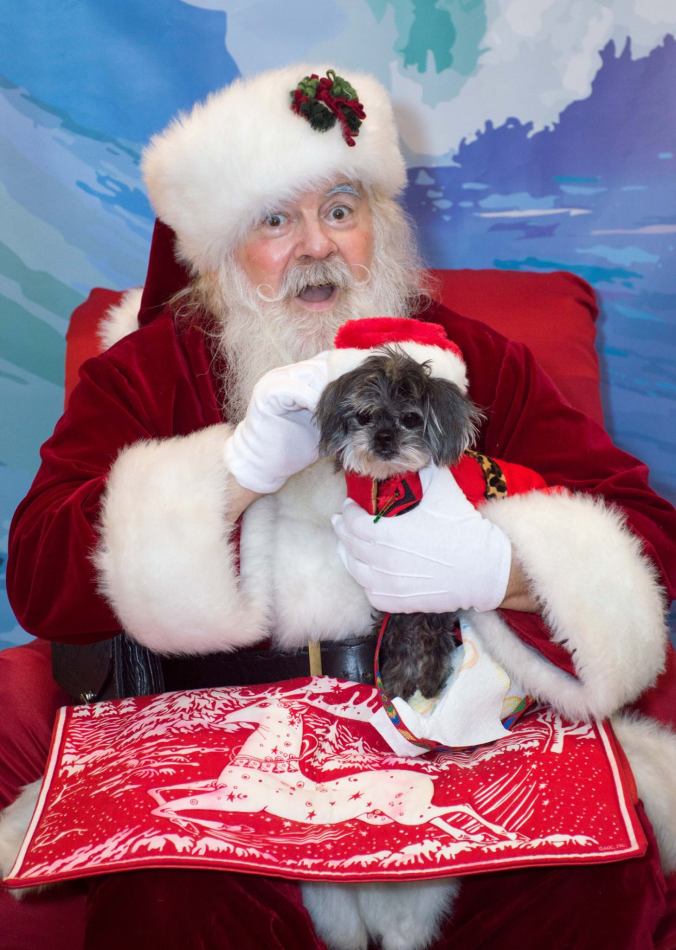 Pets and their humans had the opportunity for photo-ops with Santa Claus himself and photos taken by the event photographers. All attendees enjoyed a complimentary cocktail featuring Papa’s Pilar Rum mixed up by Santiago’s Florida Kitchen and Craft Bar, the new on-site restaurant at the Guy Harvey Oceanfront Resort. Furry guests also received a complimentary Santa hat as a welcome gift. The $10 entry fee was donated to Ayla’s Acres and in-kind donations of food and pet supplies were actively being taken in during the event. 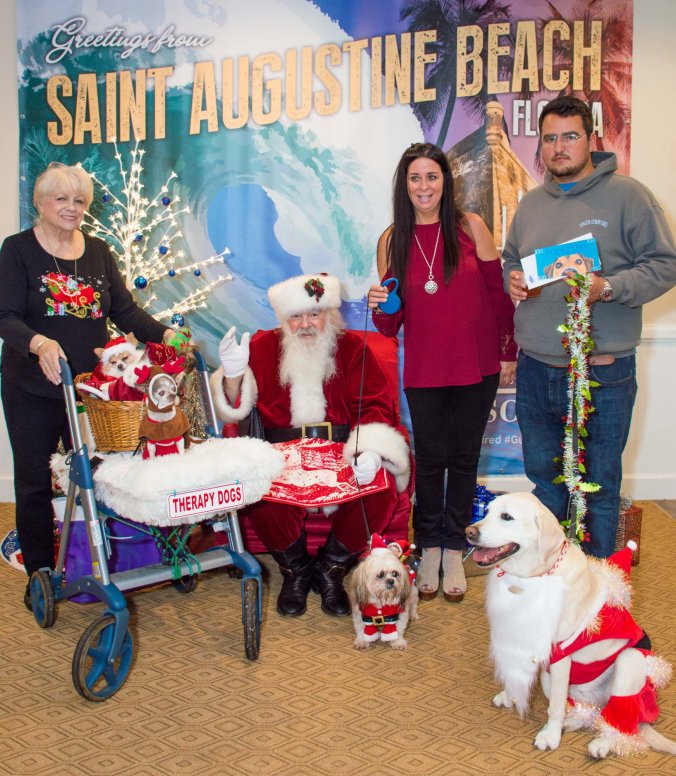 Like any good costume event, there was a contest for best dressed and 3 pooches and their humans took home the prize. The winners included a basket full of chihuahuas known as the Therapy Dogs all donning their holiday best, an adorable white lab covered in a tinsel-trimmed Santa costume and shih-tzu with an elf riding on her back. The resort also held a Facebook photo contest preceding the event in which followers submitted photos of their pets in holiday costumes and a winner was selected at random. 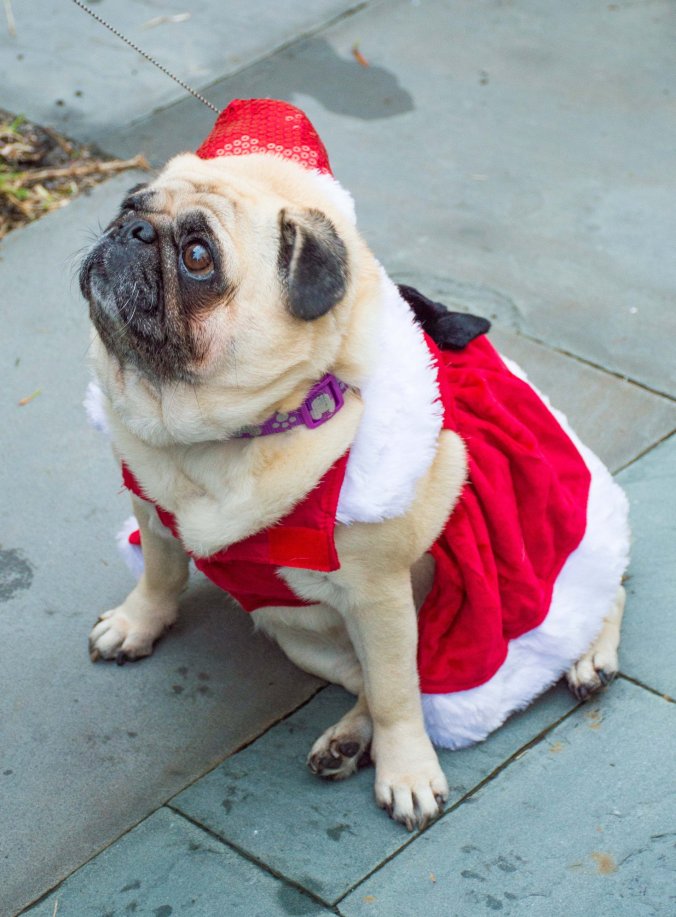 Special thanks to the sponsors, Papa’s Pilar Rum and local Faux Paws on St. George Street in historic St. Augustine.